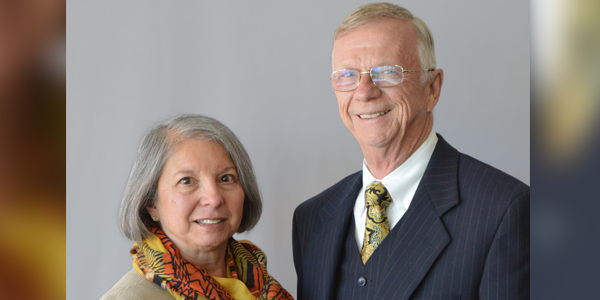 At BU, Jack Wise '67 was a National Science Foundation scholarship recipient and the epitome of a well-rounded student, succeeding academically, and active in both the arts and athletics.

"I had such a positive experience," says Jack. "I was president of the choral organization, and a member of the concert choir, Madrigal singers and men's glee club. I did some productions on stage. I played football and tennis and worked as an intermural referee."

While Jack appreciated the opportunities BU offered for fun, it was the mentoring opportunities with faculty that impacted him the most throughout his student experience. "My father was a pastor, and I grew up in Edwardsville. John Scrimgeour (a math teacher and a counselor at BU) was from Edwardsville too. in fact, his family belonged to our congregation. He helped advise me in many different situations."

After commencement, Jack taught algebra and geometry in both the high school and college classrooms. He changed course after about ten years, veering into a new career, thanks to an interest sparked by a part-time job.

"I did some work for Pomeroy Department stores, dressing windows and designing displays," says Jack. "It just sort of took off."

The burgeoning interest grew, and before long, Jack opened the Design Center in Pittston, Pennsylvania. While owning a successful interior design business for nearly 45 years has kept him busy, Jack still finds time to return to campus on a regular basis. He attends choral concerts whenever possible, as well as wrestling matches and football games.

Now Jack says it's time to give back to the university that gave him the skills to succeed, as a teacher and a business owner.

"I always appreciated my time at BU," says Jack. "I felt that I had a chance to move up and get involved, not to be just a regular, nondescript college student. The math department was great. My junior and senior years, I really appreciated the talented professors."

In support of that experience, Jack created a virtual endowment in his estate plan to establish a scholarship, adding to it with annual gifts in order to activate it immediately. Early activation means the scholarship is awarded now, so he will see the impact of his gift. This spring, Jack met his first scholarship recipient, Tanya Roque, the third oldest of nine children.

"At first, a scholarship seems so farfetched," says Tanya. "As high school juniors and seniors, we apply, apply, and apply but rarely receive them. For me to not have applied but still receive this scholarship was amazing. It really helped me and my family."

"I just want to help a student go through their four years at BU," says Jack.