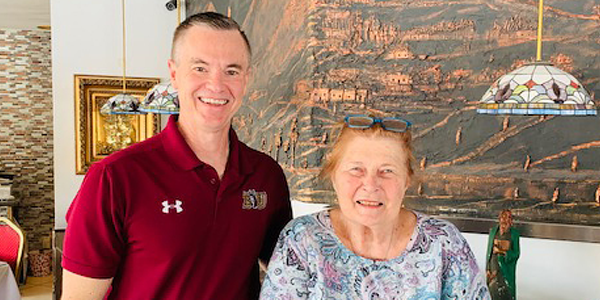 Judy Wolf '62 wanted to make a gift to help deserving students, but she also needed to supplement her income. Creating a charitable gift annuity allowed her to do both.

In exchange for the gift, Judy benefits from a fixed annuity that is based on her age at the time the annuity was created and the size of her gift. At the time she created the charitable gift annuity, she also was entitled to a charitable income tax deduction for a portion of the gift value.

"I don't think there's a better way to support a charitable organization," Judy says. "This method gives me a deduction on my taxes. I also get an annual payout of nearly 7 percent, which is more than I would get at any bank today."

After graduating from Bloomsburg, she worked in Chester County while obtaining her MA at Temple University. Judy moved to California after completing her degree in 1965 following her parents who had moved there the year before.

When her husband passed away in 1987, she changed her career path and became a Tax professional. "If I knew then what I know now, I would have majored in business," Judy continues. "It suits me better and the funny thing is, Dick Lloyd, who is the president of our class of 62', was a business major and now he goes to a CPA to get his taxes done and, I majored in education, but I do people's taxes during tax season."

It was the change of her career path that put Judy in the mindset to channel her giving to areas that can help her also save on taxes. That was when she knew that a charitable gift annuity would be best for her.

"I was receiving survivor benefits from my husband's company, but when I turned 62, I knew they would be stopped, and I would need another form of income," adds Judy. "The annuity was the perfect way for me to do that and I set it up with BU in 1997."

Judy recently created a second charitable gift annuity with BU through the Silicon Valley Community Foundation that ultimately will benefit Bloomsburg. She has also established a scholarship endowment because she knows how important education is to today's students.

"I think it's very important to give back especially with the high cost of education now and knowing the types of students (especially first-generation students as I was). When I went to Bloomsburg many parents were struggling to support them. If I can provide that help, while also generating some additional income for myself, I can't think of any reason why I shouldn't."